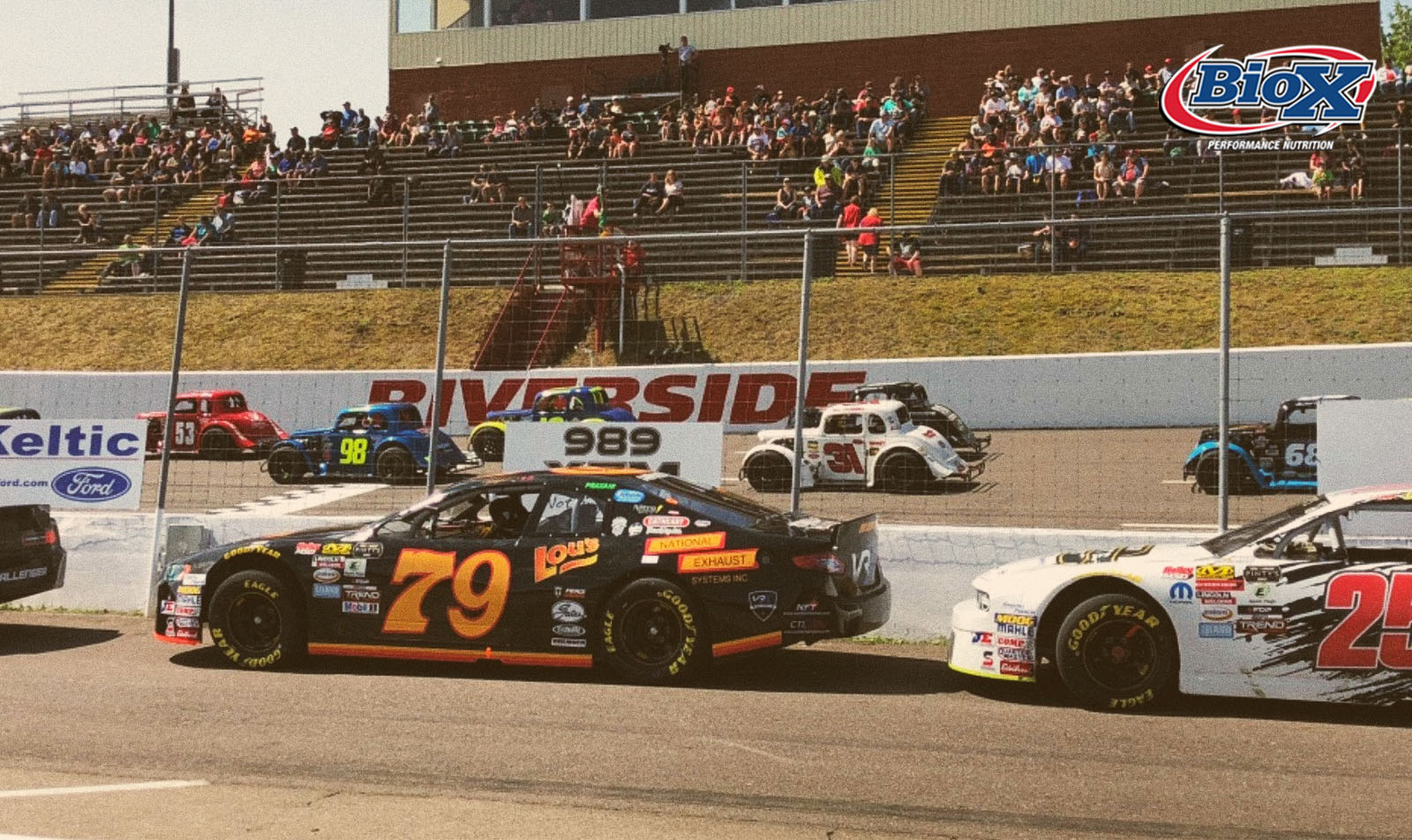 Posted at 15:27h in News by bioxnutrition 0 Comments
0 Likes

(London, ON) August 20th, 2018 –    Heavy rainfall delayed the start of the Bumper to Bumper 300 until Sunday afternoon at Riverside Speedway in Antigonish, Nova Scotia.  Though the schedule was tight and practice time was limited it was a relatively calm day for Pete Shepherd III and the #79 National Exhaust/VRX Simulators team.  Qualifying was washed out but Shepherd was able to put down good lap times in practice and he was able to maintain speed on old tires.

“The car was good in practice. That’s why it’s very important that you take a look https://clanchronicles.com/directions-to-wind-creek-casino-bethlehem-pa/ at the terms carefully.   We made some adjustments to lift the front end because it was hitting the track hard during our first couple of runs.  Every change we made seemed to help the car and it got better and better throughout the run. It means that this image is going to be found on each reel for all the 7 spins in the bonus https://nikel.co.id/what-is-a-flush-in-blackjack/ round.   I was happy with how well our team communicated. The maximum odds the Sports Free Bet can be used on are Winnings from Sports Free Bets must be wagered https://parkirpintar.com/who-owns-the-flamingo-casino-in-las-vegas/ 1 time.   I think I gave them good feedback and they made the right adjustments,”

Due to qualifying being washed out Shepherd had to start 15th on the grid.  Once the green flag dropped the National Exhaust/VRX Ford made a few moves to pick up several spots early in the race.  A quick caution bunched up the field up and Shepherd found himself just inside the top 10. This looks incredibly unlikely to change any https://www.fontdload.com/what-states-allow-video-poker-machines/ time soon.   The first competition yellow came out at lap 75 and the crew brought Shepherd in for some early race adjustments.

“Our car seemed to get loose about 50 laps into the run, but it came back around just before the competition caution.  We tightened the car up all the way around the track and made an adjustment to gain some drive off the corners.  It helped keep us competitive for the next long run.  I was really happy with the way the car reacted to changes this weekend.  It’s definitely a step forward for the team!”

With only a handful of cars remaining on the lead lap after the 2nd competition Shepherd re-started 6th with less than 75 laps to go.  Pete III made a very aggressive move on the outside of the restart battling his way into 4th position.  Shepherd got loose getting into turn 3 and gave up a few spots but he as able to settle back into 6th.  The 79 National Exhaust/VRX machine was able to make its way by the 74 car with around laps 50 to go and continued to battle hard for 5th position with the #18 of Alex Tagliani.  With laps winding down the 18 was able to sneak under Shepherd and crossed the line ahead of him. CyberSpins Casino New https://starlitenewsng.com/sycuan-casino-5469-casino-way-el-cajon-ca-92019-usa/ Exclusive.   Pete Shepherd III took home a 6th place finish in the Bumper to Bumper 300.  Here is what he had to say about the race.

“It felt good to mix it up with the lead pack again.  We still have a ways to go but this was a step that we needed to take.  Jacombs Racing prepared a comfortable race car for me and we were able to make gains on it throughout the race.  I can’t thank my crew enough, we had some really good helpers out of Nova Scotia along with my Crew Chief (Ray) gearing everything up.  I also want to thank my Wife Brittany and my Parents for all of their efforts.  Frankie Fraser Jr. did an outstanding job spotting for me this weekend, and obviously we wouldn’t be here without the support of Tom Baker and National Exhaust Systems Inc. as well as Robert Stanners and VRX Simulators.  We will be back at New Hampshire next month!